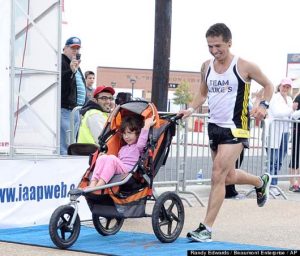 Iram Leon has been running his entire life, entering the track team in 3rd grade and part of academic running teams till he graduated college running cross country. However, shortly after he turned 30, on his second marathon training cycle, it took on a different meaning when he was diagnosed with brain cancer after a grand mal seizure. In the middle of tests, he kept running as both a distraction and focus point to where he even put off brain cancer surgery to run a marathon, the first he would qualify for Boston on. He’s kept it up since then and credits running as a gigantic factor why he’s beating his prognosis. His story has been featured in lots of media including ESPN’s E60 (https://www.youtube.com/watch?v=JN9ycg7WPQM&feature=youtu.be). The loves of his live even came together recently in a running themed wedding featured in Runner’s World https://www.runnersworld.com/runners-stories/a22889446/run-themed-wedding-ceremony/. Come hear his share the story of “My favorite start line”

Go to our Online Store to Personalize your Medal!